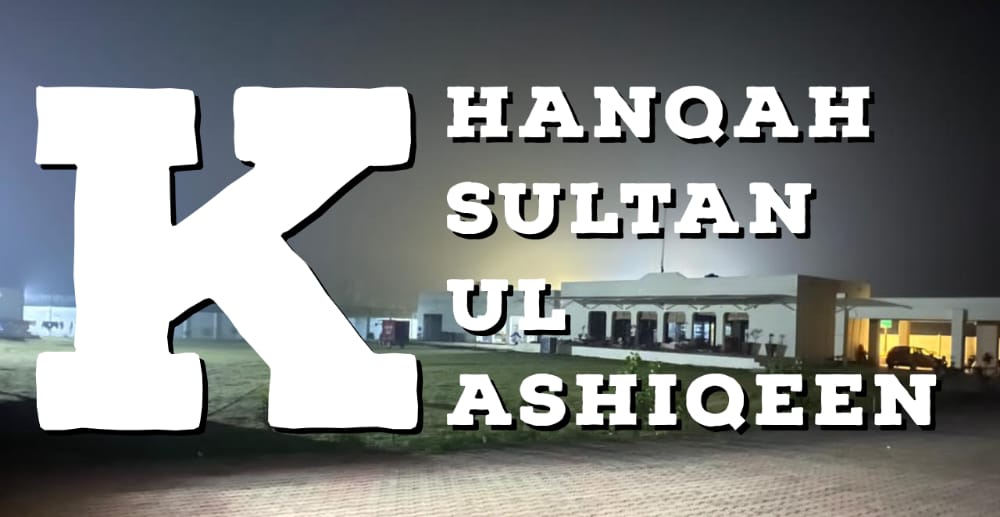 Khanqah Sultan ul Ashiqeen is the khanqah of Sultan ul Ashiqeen Sultan Mohammad Najib-ur-Rehman. He is the 31st and present Shaikh of the Sarwari Qadri order. He is also the Universal Divine Man of this era. Being on the footsteps of the Holy Prophet (pbuh), he trains and guides the seekers of Allah on the righteous path in the same way as the Holy Prophet trained the Companions. This article provides a brief introduction to the Sarwari Qadri order, and the Khanqah Sultan ul Ashiqeen. Which is the centre of Faqr (Sufism) today.

Khanqah plays a pivotal role in spiritual training of Muslims. The system of khanqah has existed since the early days of Islam. The Holy Prophet (pbuh) himself laid the foundation of the first khanqah by establishing the platform of al-Suffa. Khanqah is a place where the seekers of Allah find seclusion from the worldly distractions in company of a perfect spiritual guide to fully focus towards Allah in order to gain His closeness and gnosis. The word Sufi or Sufism stems from al-Suffa. The people of al-Suffa were hence, the first Sufis to have a khanqah.

All the Sufi saints in the history of Islam established Khanqahs to guide and train the seekers of Allah on the righteous path. Following this tradition, Sultan ul Ashiqeen Sultan Mohammad NajiburRehman also established a Khanqah for this purpose as the present Shaikh of the Sarwari Qadri order.

Sarwari means to take oath of allegiance on the sacred hand of the Holy Prophet (pbuh) and Qadri means to follow the footsteps of Al-Ghaus al-Azam Shaikh Abdul Qadir Jilani. Sultan Bahoo says:

Sarwari Qadri is the one whom the Holy Prophet grants oath of allegiance himself. As a result, his inward and outward self becomes free of all sorts of malice. He becomes steadfast follower of sharia. (Mehak ul-Faqr Kalan) Sarwari Qadri order is superior to other orders because it is unique spiritual order which leads to the greatest blessing of vision of Allah and presence in the Mohammadan Assembly. There is no higher and exalted station esoterically than the two aforementioned stations. These are unique to the Sarwari Qadri order. Faqr is the Holy Prophet’s inheritance.

Sarwari Qadri order is superior to other orders because it is unique spiritual order which leads to the greatest blessing of vision of Allah and presence in the Mohammadan Assembly. There is no higher and exalted station esoterically than the two aforementioned stations. These are unique to the Sarwari Qadri order. Faqr is the Holy Prophet’s inheritance.

Meaning: Faqr is my pride and it is from me.

Meaning: Faqr is my pride and Faqr is from me. Faqr is the reason of my superiority over all Prophets and Messengers.

In the Sarwari Qadri order, there are no complexities of invocations, reflections, forty-day seclusions or holding the breath. Additionally, there is no pain of mystic struggles or confusions caused at initial levels of mystic path. (Allah has) absolved this order of apparent attire and practices of Dervishes. Moreover, the Sarwari Qadri way is disgusted of the superficial ways of the so-called spiritual guides. Such as holding the stick and chaplet, wearing gown or turban etc. However, the specialty of this order is that the spiritual guide elevates the seeker to final level on the very first day. He does so by granting him the king of invocations ‘Hoo’ (ھُو). Along with that he grants the contemplation of Ism-e-Allah Zaat and also it’s inscribing practice on the body. One cannot find such blessings in any other order.

Sarwari Qadri spiritual guide is comprehensive and complete. He is such a book, inwardly as well as outwardly, which has the status of Book of all the books. By reading this book, the seeker annihilates in Allah in such a way that there remains no veil before him. The seekers who read this book with complete faith, sincerity and purity of inward, all their objectives are achieved easily. (Kaleed-ul-Tauheed Kalan)

Khanqah of Sarwari Qadri order is distinguished from other Khanqahs just as the Sarwari Qadri order is superior to other orders. The excellence of the Khanqah is due to the presence of the Universal Divine Man (al-Insan al-Kamil). The seekers of Allah cannot find his company anywhere else other than his khanqah. The Universal Divine Man in each era is only from the Sarwari Qadri order. This is because this order belongs to the king of all Saints, Ghaus al-Azam Shaikh Adbul Qadir Jilani whose foot is on the neck of all the Saints (past and present). The leaders of all other orders gained esoteric beneficence from Ghaus al-Azam and then started their own orders. Whereas the Qadri order belongs to him. As he is the king of all the Saints so is the case of his spiritual order. Therefore it is not possible that the Universal Divine Man would belong to any other order.

Prophetic Way of Purgation of Innerself

Being the Universal Divine Man, Sultan ul Ashiqeen is on the footsteps of Prophet Mohammad (pbuh). So, he trains his disciples in the same way as the Holy Prophet did. The Holy Prophet used to teach Quran to the Companions exoterically but at the same time, through his company and his perfect spiritual glance, used to enlighten their inwards that would make them understand the true message of Quran. There are many examples of the Holy Prophet elevating his Companions’ esoteric status instantaneously, merely through his spiritual attention such that they immediately felt the change and could do things they previously never thought they were capable of doing.

In order to provide a place for the seekers of Allah to gather and cleanse their inwards, Sultan-ul-Ashiqeen Sultan Mohammad Najib-ur-Rehman established his khanqah on Friday, 23rd October 2009 (3rd, Dhul al-Qadah, 1430 H). This khanqah has become centre of Faqr today from where the message of Faqr is being spread throughout the world. The purpose of setting up this khanqah was to provide an environment for the seekers of Allah to attain purgation of their innerselves just as it used to happen in the khanqahs of the Sufi Saints. Many devotees from outside Lahore as well as from abroad come over to stay in the khanqah to benefit from the company of their spiritual guide.

This khanqah has its doors open for everyone regardless of one’s status, gender, caste, creed, colour, sect or school of thought. It has many departments that work closely day and night under the guidance of Sultan ul Ashiqeen Sultan Mohammad NajiburRehman in spreading the beneficence of Faqr. These include the Preaching department, Sultan ul Faqr Publication, Monthly Sultan ul Faqr Magazine, Video Social Media, Library, Lodging and kitchen and security to name a few.

The Khanqah of Sarwari Qadri order that Sultan ul Ashiqeen had established has been operating successfully under his guidance. Various departments of the khanqah are working on spreading the message of Faqr to the masses. This includes research on Islamic literature to produce new books, journals and publishing this work both in traditional formats as well as on the internet and social media.

With that in mind and by the grace of Allah, Sultan-ul-Ashiqeen launched the construction of Khanqah Sultan ul Ashiqeen and Masjid e Zahra. The construction work has progressed rapidly and the project is nearing completion. This khanqah will feature a library, computer lab, free kitchen and accommodation for devotees travelling from far to visit the khanqah or to attend the events. The purpose of Khanqah Sultan ul Ashiqeen is to provide a place for the seekers of Allah to attain purgation of their innerselves and enable them to gain gnosis of Allah and presence in the Mohammadan Assembly.

The construction of Masjid e Zahra is progressing well. However, due to the scale of the project Tehreek Dawat e Faqr encourages the public to take part in this noble cause in whichever way they can. Contributing financially in the construction of Khanqah Sultan ul Ashiqeen and Masjid e Zahra will be a sadaqah-e-Jaria. This means that until the time this khanqah serves as a place of guidance for the seekers of Allah to His path and continues to be a place where invocation of Ism-e-Allah Zaat is practised, the people who contributed in the construction will continue to get rewarded both in this world as well as in the life hereafter.

If you would like to become part of this historic project, please get in touch with Tehreek Dawat e Faqr.

What is Khanqah used for?

What is Khanqah Sultan ul Ashiqeen?

Open chat
1
Ask us about Sufism!
Welcome to Website!